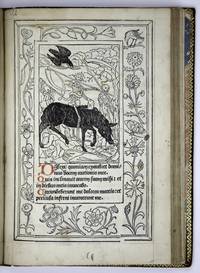 Paris: Simon Du Bois for Geoffroy Tory, 1527. 4to (196 x 139 mm). Collation: a-r8 s4. 140 leaves, bâtarde type, title printed in red and black, initials and headings printed in red throughout, printer's "pot cassé" device (Bernard, no. 9) on title and on verso of last leaf, each page within a four-part woodcut border of flowers, insects, animals and other ornaments, 13 large outline woodcuts, including the Annunciation on two facing pages, ruled in red. 18th-century French marbled calf gilt, edges gilt. Front joint repaired; slight marginal worming, repaired. Provenance: Pierre Bosuiel (bookplate); from the Collection of Arthur & Charlotte Vershbow, purchased from Georges Heilbrun, 1968. A FINE COMPLETE COPY OF THE THIRD TORY HOURS, AND THE FIRST APPEARANCE OF THESE ILLUSTRATIONS AND BORDERS. Each of Tory's three sets of Horae woodcuts represents an independent cycle of design. The renewed privilege granted to Tory on 5 September 1526 appears in both this edition (on a1v-a2r) as well as the octavo edition completed in Simon de Colines' shop on the previous day. This edition, however, contains the first use of the illustrations and borders "à la moderne" previously mentioned in the privilege of his 1524/25 Horae, which used the woodcuts of his "à l'antique" set.

"Every page is enclosed in a charming border composed, after the manner of illuminated manuscripts, of detached flowers, fruit, foliage, birds, beasts, insects, &c., all in outline, the various portions of the blocks being combined in endless variety throughout. At the foot of each page is seen either a coat-of-arms or a device, personal or otherwise" (Fairfax Murray). Mortimer considered them somewhat less effective in their uncolored state than Tory's earlier "antique" set, and Pollard suggests that both borders and illustrations were intended to be filled in by an illuminator, as the designs are reminiscent of manuscript Hours. Striking among the illustrations is the dramatic use of black for Death's horse (and black crow flying overhead) in the Triumph of Death illustration, as well as the black figure for one of the Kings in the Adoration of the Magi. Each of the first three Tory Horae contain different cuts and borders, the second with colophon dated 21 October 1527 is printed in octavo format in roman type. Brun, p.232; Bohatta 330; Fairfax-Murray French 279; Harvard/Mortimer French 304; Lacombe 364-371. Fact and Fantasy 21.

All items are guaranteed as described and are returnable within 30 days. Please e-mail [email protected] or call (914) 478-1339 to initiate your return. In your e-mail, please include your name, item(s), and reason for return.

All postage is extra.

New clients are requested to send remittance with your orders. Libraries may apply for deferred billing.

Founded in 1978 and purchased in 2016 by Thomas Lecky, Riverrun specializes in fine, rare, and unusual books from all periods and genres. There are large holdings in art, photography, artists' books, fine printing, books about books, literature, signed and inscribed books, early printing, and Americana. We have thousands of books not listed online in these and many other fields, and are constantly sourcing new material from private collections and public auction. Please let us know if we can help you locate something not listed in our stock. We are members of the ABAA and are certified members of the Appraiser's Association of America.

gilt
The decorative application of gold or gold coloring to a portion of a book on the spine, edges of the text block, or an inlay in... [Más]
device
Especially for older books, a printer's device refers to an identifying mark, also sometimes called a printer's mark, on the... [Más]
leaves
Very generally, "leaves" refers to the pages of a book, as in the common phrase, "loose-leaf pages." A leaf is a single sheet... [Más]
octavo
Another of the terms referring to page or book size, octavo refers to a standard printer's sheet folded four times, producing... [Más]
calf
Calf or calf hide is a common form of leather binding. Calf binding is naturally a light brown but there are ways to treat the... [Más]
verso
The page bound on the left side of a book, opposite to the recto page.
colophon
The colophon contains information about a book's publisher, the typesetting, printer, and possibly even includes a printer's... [Más]
fine
A book in fine condition exhibits no flaws. A fine condition book closely approaches As New condition, but may lack the... [Más]
edges
The collective of the top, fore and bottom edges of the text block of the book, being that part of the edges of the pages of a... [Más]